In Humanity, Politics and Elections, Women in Politics

I have learned in my life that “it is always darkest just before the dawn.” Last week was so dark. I sat watching “with fear and trepidation” as the Republicans threatened to end healthcare for 16 million Americans. Even as I supported efforts to stop them, I felt like the freight train was running out of control.

A New Dawn in America 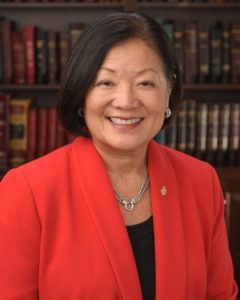 Then, Hawaii Senator Mazie Hirono stepped up to speak on the floor of the U.S. Senate. Every time I watch her speech, I am moved to tears. Her courage in sharing her story, including her fears, her family’s struggles, her unique path to the U.S. Senate, all of it. The shining sincerity of her compassion is so beautifully overwhelming, born of her uniquely American experience. Raised as a poor Japanese immigrant, she has never forgotten where she came from.

Her call for compassion, I believe, is what sealed the deal. As we all know, Senator John McCain‘s “no” was the deciding vote, following the tie-making opposition of Republican Senators Susan Collins of Maine and Lisa Murkowski of Alaska.

Why is compassion so compelling? Compassion is not simply a human emotion. There is evidence that animals are also quite capable of giving and receiving compassion. We also know that compassion in animals is not limited to animals of their same species. A dog can show kindness to a cat. A mother hen can adopt a lost baby duck. A lion can hug a man who loved him without harming him. It seems that in the natural world, compassion has no bounds.

The Courageous Women Who Defied Trump

We should not overlook the significance of the courage displayed by two other female Senators, Susan Collins of Maine and Lisa Murkowski of Alaska. No. 45 actually threatened the residents of both of their states to retaliate against the Senators. Whereas some Republican senators caved in to pressure from the Trumpster, Senators Collins and Murkowski stood firm and represented their constituents.

Their votes demonstrate that when courageous women are present in positions of power, the conversation changes. But for the courage of Senators Collins and Murkowski, Sen. John McCain would not have had his historic opportunity to say “no.” In voting “no,” Sen. McCain also stood fast to represent the best interests of his constituents in Arizona. For the first time in my life last weekend, I was “proud” to be in Arizona.

Health Care Is A Civil Right

Healthcare in America has been denied and fought for like every other civil right. 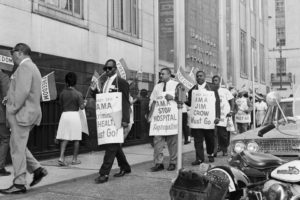 In 1966, Rev. Dr. Martin Luther King declared that “Of all the inequalities that exist, the injustice in health care is the most shocking and inhuman.” Racial disparities in health care have persisted since 1966. A 2016 study by the Henry J. Kaiser Foundation found that in 2014, 55% of all uninsured persons were people of color. Seventy-one percent ( 71%) of Whites were insured privately and only 21% had Medicaid or public insurance. By comparison, 51% of Blacks had private insurance, and 37% had Medicaid or public insurance. The Kaiser study concludes that “people of color have much to gain from health care reform.”

President Barack Hussein Obama was inspired to make health care his signature piece of legislation. Indeed, arguing for health care reform in 2009, President Obama cited the death of his own mother from cancer and the challenges she faced obtaining insurance because her cancer was deemed a pre-existing condition. His mother, Stanley Ann Dunham, was a White woman.

To learn more about the fight to provide healthcare for all, go to HealthyCalifornia.org or Citizen.org or NationalNursesUnited.org. Also check out Healthy California’s latest video.