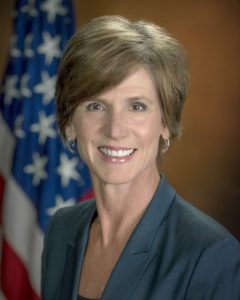 Her name is Sally Yates.  She was the Acting Attorney General of the United States.  The statement that triggered Mr. Trump’s rage describes her constitutional role:

“My responsibility is to ensure that the position of the Department of Justice is not only legally defensible, but is informed by our best view of what the law is after consideration of all the facts.

In addition, I am responsible for ensuring that the positions we take in court remain consistent with this institution’s solemn obligation to always seek justice and stand for what is right.  At present, I am not convinced that the defense of the Executive Order is consistent with these responsibilities nor am I convinced that the Executive Order is lawful.

Consequently, for as long as I am the Acting Attorney General, the Department of Justice will not present arguments in defense of the Executive Order, unless and until I become convinced that it is appropriate to do so.”

This is not the first time that Sally Yates took a principled position on behalf of the American people.  In August 2016, Ms. Yates instructed Justice Department officials to either decline to renew the contracts for private prison operators when they expire or “substantially reduce” the contracts’ scope. The goal is to reduce and end the federal government’s use of privately operated prisons.  These prisons are used exclusively for non-citizen inmates.

Yates’ action follows the Office of Inspector General (OIG) report on federal private prisons.  The OIG found federal private prisons have higher rates of assaults and deaths under questionable circumstances, problems with contraband, low quality food and medical care.  These problems are reported in multiple exposes in Mother Jones and the Nation. These are the same prisons Mr. Trump will use to house immigrants targeted for deportation.

As a result of the Trump Executive Order on immigration issued on January 27, 2017, students, visitors and green-card-holding legal permanent United States residents from seven countries — and refugees from around the world — were stopped at airports in the United States and abroad.  Some refugees were blocked from entering the United States and sent back overseas.  Some refugees stopped at airports with no place to go would be detained.  That’s why Americans and lawyers descended upon major airports.  People who had committed no crime but had no place to go would be taken to federal private prisons.

Being A Social Engineer

It is a good time to be a civil rights lawyer.  Around the country, lawyers are organizing and galvanized to be social engineers.  It means that we, like Sally Yates, will uphold and defend the Constitution as a part of our regular day job.  Not just on holidays. The fight is clearly on.  Michael Moore warns that Mr. Trump has started a bloodless coup.

By changing the laws, firing lawyers and senior staff and giving legal authority to his advisors with the stroke of his pen, Mr. Trump is clearly taking control of the Executive branch.  With three Supreme Court nominations within his reach, he will soon control the United States Supreme Court.  Under a far right Supreme Court, our role as civil rights lawyers will likely be rendered obsolete in federal Courts.  Our role as social engineers may be the only way left to practice civil rights law in America. Thankfully, Charles Hamilton Houston, in his life’s work, has already given us the precedent to follow.