The Vote for DNC Chair 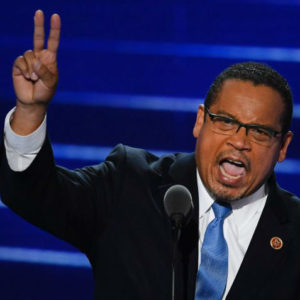 This weekend in Atlanta, the Democratic National Party will elect a National Committee Chair.  The progressive favorite is Keith Ellison, a veteran Congressman from Minnesota. Keith Ellison is the first Muslim ever elected to Congress. He is also the first African-American Congressman elected from Minnesota. Keith is running to succeed Donna Brazile who served as the Interim DNC Chairperson.

Who Votes for the DNC Chair?

According to VOX News, there are 447 potential voters for the DNC Chairperson. They include state party chairs and vice-chairs, 112 slots evenly divided by sex. State party officials, allocated by population and Democratic vote fill 208 slots.  California has 20 slots in this category. Our representatives include Hon. Barbara Lee, Rep. Maxine Waters,  NAACP State Chairwoman Alice Huffman and Christine Pelosi. 48 slots go to various national Democratic groups. The outgoing DNC chair gets to appoint up to 75 slots. 8 slots go to Democratics living abroad, but they each only get to cast half a vote. The DNC roster appears to include fair representation of women who will get to participate and vote in this important decision.

Contested DNC Chair races are rare. In 1985, Nancy Pelosi ran for DNC Chair.  Pelosi reportedly urged the Party to “move to the center” and become “the party of capitalism.” Nancy Pelosi stamped down younger leadership in November 2016 when she held onto her position as the leader of the Democrats in Congress. It will be interesting to see if her daughter Christine will vote for Keith Ellison. The chair (and eight other leadership officers) are elected by a majority vote. Another impressive candidate for DNC Chair is Jehmu Greene of Texas.

Who Is Keith Ellison?

Keith Ellison was raised in Detroit Michigan by two professional parents.  Keith and three of his brothers became lawyers. Another brother became a doctor.  Keith is a former trial lawyer who started his career as a civil rights lawyer.  He also worked for a time as the Executive Director of the nonprofit Legal Rights Center in Minneapolis.  He says his grandfather’s work with the NAACP in Louisiana influenced him in his youth. In his first week as a member of Congress, Ellison voted with the new Democratic majority as part of the 100-Hour Plan to raise the minimum wage, for federal funding of stem cell research, and to allow Medicare to negotiate pharmaceutical prices. He has a plan for his first 100 days as DNC Chair that focuses on organizing the massive opposition to the Trump administration.

Keith Ellison is probably the only candidate for DNC Chair that has an African-American Agenda as part of his platform.  This is especially relevant because the relationship between the party and the African-American community has become increasingly strained. In 2016, many Black leaders urged Blacks to “abandon” the Democratic Party. Hillary Clinton’s reluctant discourse with Black Lives Matter activists was not enough to give her the victory.

In 2014, PowerPac+ issued its Fannie Lou Hamer Report. The report showed that of $518 million spent in 2010 and 2012, the Democratic Party spent a measley 1.7% of its money on minority owned political consulting firms. One difference between Keith and former Labor Secretary Tom Perez, also running for DNC Chair, are their views on conflicts of interest within the party. Keith opposes conflicts by DNC members who also have contracts with the Committee. Perez is apparently not inclined to take on this issue.

Who Supports and Opposes Keith Ellison? 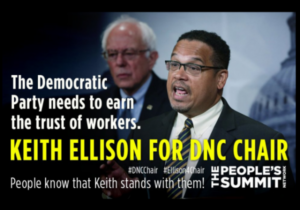 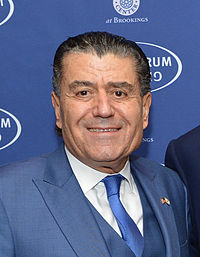 Mr. Saban is Hillary Clinton’s biggest donor and reportedly has a net worth of $3.6 billion. He has also contributed between $5 million to $10 million to the Clinton Foundation. Mr. Saban is a leading member of the .01% of wealthy Americans. Saban says that his greatest concern is to protect Israel and he entered politics for that purpose. Regrettably, American politics has long been defined and divided by support for Israel (or not).  In my experience, there is a very thin line between folks who are “pro-Israel” and straight racist Zionists.

“Evidence” used to label Keith Ellison as “anti-Semitic” is his support of Stokely Carmichael‘s right to speak at the University of Minnesota in 1990 and his support of the 1995 Million Man March. As someone who hosted Stokely Carmichael at Yale in 1975, and a businesswoman who closed her business on the historic day of the Million Man March to support my brothers, I find this “evidence” completely ridiculous.

The DNC Chair position is historically a bureaucratic one. The DNC will set the rules for and administer the election primary process. And it’s the DNC that will help determine whether Democrats can in fact make gains in the 2018 midterm elections. But, the Chair does lead on Democrats’ decisions, organization and spending priorities. The Chair can be a prominent voice in the national dialogue on issues that matter to Americans.  In addition, the Chair provides direction and hopefully, inspiration to Democrats locally and nationally.

This election really matters, however, because it will either define or expose the Democratic party.  Most of all, it will show whether we are really a grassroots party, or the party of capitalism. Whether we want progressive, younger members to lead us, or to continue to be dominated by those who have power, money, control and conflicts of interest in the party. Today, progressive activists everywhere proclaim our opposition to the “Muslim ban” issued by the Trump administration. There is a question whether we will also see a “Muslim ban” inside the Democratic party this weekend.