I feel like we’re tettering on the edge of a cliff.  The next deep breath, we fall into the abyss.

Today, April 6, 2017, is truly one of the last days of American democracy.  Why? Because today, the Republican Senators voted to change the rules of the U.S. Senate. They made the change to ensure that Democratic Senators will no longer have a voice in voting on federal judges at any level. It also means that, tomorrow, the right wing of the American judiciary will take over the U.S. Supreme Court for possibly at least the next 50 years. So, the transformation of America is complete.  Elections do matter. The bloodless coup which became apparent in November 2016 is complete.

Who Is Neil Gorsuch?

This dramatic rule change was necessary to get Judge Neil Gorsuch of Colorado appointed to the U.S. Supreme Court. Judge Gorsuch is the son of Anne Gorsuch. Anne was a Ronald Reagan appointee who at one point was the head of the Environmental Protection Agency (EPA). She cut the EPA’s budget by 22% and reduced the number of cases filed against polluters. Ann also relaxed Clean Air Act regulations and facilitated the spraying of restricted-use pesticides. She hired EPA staff from the industries they were supposed to be regulating.  According to her Wikipedia page, Anne is the first agency director in U.S. history to be cited for contempt of Congress after she refused to comply with a subpoena.

Judge Gorsuch’s background as a litigator is one of privilege. He graduated from Harvard Law School in 1991.  He clerked in the D.C. Circuit federal court and the U.S. Supreme Court after law school. He then joined an elite D.C. law firm and stayed there for 10 years, representing corporate clients and billionaires.  In 2015, his former firm paid new associates “a starting bonus “of $175,000 or a $330,000 signing bonus to those who clerked for Supreme Court Justices. Gorsuch left the firm in 2006 when George Bush appointed him to the 10th Circuit Court of Appeals.

What is His Record?

Judge Gorsuch is the heir to Antonin Scalia. Like Scalia, Judge Gorsuch says he will “look backward.” He believes the Constitution should be interpreted the way it was interpreted when it was written. No matter that in the original Constitution, Black folks are only 3/5 of a person and women do not have the right to vote. In Gorsuch’s view, the infamous Dred Scott decision would be “good law” because it is based on what the judges then understood the law to be. He would also support the decision in Plessy v. Ferguson which ruled that Jim Crow laws were constitutional. The Court’s understanding of the law at that time legalized discrimination that endured for nearly sixty years.

His record on women’s rights and civil rights as a federal judge is troubling.  In February 2017, the Leadership Conference on Civil and Human Rights and 107 civil rights organizations signed a letter opposing his nomination. What is really scary, however, is that the National Rifle Association (the NRA) just dropped a million dollars to support his nomination. Gorsuch’s apparent views on guns led Americans for Responsible Solutions, the gun violence prevention organization founded by former Congresswoman Gabrielle Giffords and Navy combat veteran and NASA astronaut Captain Mark Kelly, and its sister organization, the Law Center to Prevent Gun Violence, to oppose his nomination. Under Gorsuch, America’s status as the most violent country in the world will be preserved.

“Defective from The Start”

Gorsuch says using the courtroom to “debate social policy is bad for the country and bad for the judiciary.”  If Gorsuch opposes using courts to debate social policy, he likely will oppose efforts to change any policies in the Courts.  His views are exactly opposite from the greatest lawyer and judge America has ever known, Justice Thurgood Marshall.  In 1987, Justice Marshall pointed out that “we the people no longer enslave, but the credit does not belong to the framers. It belongs to those who refuse to acquiesce to outdated notions of liberty, justice, and equality and who strived to better them.” He said “the government they devised was defective from the start, requiring several amendments, a civil war, and major social transformations to attain the system of constitutional government and its respect for the freedoms and individual rights, we hold as fundamental today.” 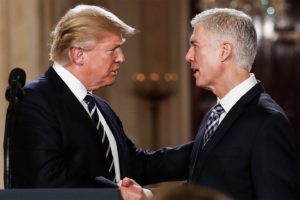 Donald Trump promised to appoint a “Scalia-like” justice to the Supreme Court. He is keeping his promise. Justice Scalia was a rabid opponent of affirmative action and voting rights. He wrote the Walnart v. Dukes decision that ended one of the largest class-action suits in history and set civil rights progress backward for years. Scalia opposed gay rights and a woman’s right to choose what to do with her own body. Scalia denied protection to victims of domestic violence and he wanted to abolish the Miranda rule protecting a defendant’s right to remain silent. The truth is, if Judge Gorsuch starts where Scalia left off, he too will be “defective from the start.”

“Meet the Women You Don’t Know”