Why Are They Marching?

Why are They Marching?

I’m standing at the corner of Ninth and Fallon in downtown Oakland.  My phone rings and its Amy, my elderly foster mother in Cincinnati.  “Why are they marching?” she asks.  Another friend reports that her mother asks her in a not-so-nice tone “Did you wear a vagina on your head?”  So, not everybody “got the memo!”

So why did we march, by the millions here and around the world.  The “official” goal of the day was “to stand together in solidarity for the protection of our rights, our safety, our health, and our families — recognizing that our vibrant and diverse communities are the strength of our country.”  That’s the memo I got for the Women’s March in Oakland.  And so, more than 100,000 people had a peaceful march through Oakland.  Yes, we stood and we walked in solidarity.

A Beautiful Sight to See!

It was a beautiful sight – to see my beloved awesome beautiful Oakland community once again on the right side of history.  And the signs said it all.

“Keep those Bad Apples Out of the Cabinet.” 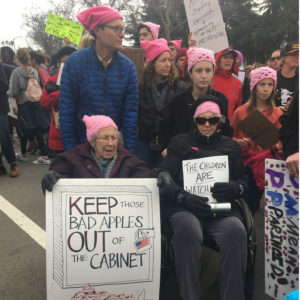 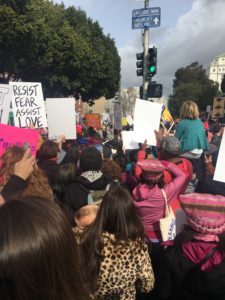 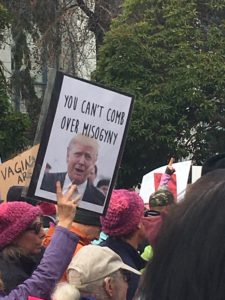 “You can’t comb over misogyny.”

“A woman’s place is in the resistance.” 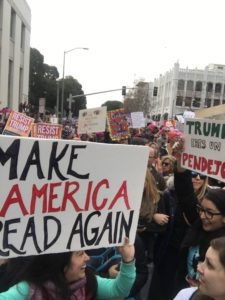 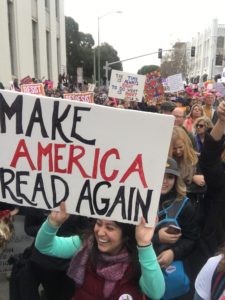 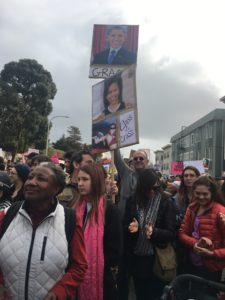 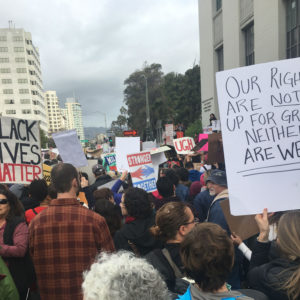 There was music and drums and tamborines.  We danced, we chanted, we marched.  There was exceedingly warm comaraderie, respect and appreciation for everyone around you.  It felt like love overflowing. And yes, those little pink hats were everywhere, symbols of a woman’s vagina.  When I asked the man standing next to me what they meant and he told me, all I could say was “I knew that.”

So, the question is why does it matter that millions marched around the world.  We are now in the midst of the Trump “deconstruction” of America.  Executive orders are literally flying out of the White House.  Threats of ridiculous policy initiatives have now become law.  Trump is doing everything he can to divide America.  The “haves” are going to have it their way.  The rest of us will have to figure it out on our own.

It matters whenever you say “NO” to fascism, racism, sexism and tyranny.  Mr. Trump’s pen cannot change our vision for the future of our children and our nation.  His tweets cannot change our commitment to keep Dr. King’s dream for America alive.  While Trump honors the murderous legacy of President Andrew Jackson, let us remember the magnanimous leadership of President Barack Hussein Obama.

The Children Are Watching!

In the week of celebrating Dr. King’s birthday, I kept reading  his “Letter from A Birmingham Jail.”  Dr. King reminds the white clergymen that”injustice anywhere is a threat to justice everywhere.”  He reminds them that “everything Hitler did in Germany was ‘legal’ and everything the Hungarian freedom fighters did in Hungary was ‘illegal.”  He reminds them that “the goal of America is freedom” and “if the inexpressible cruelties of slavery could not stop us, the opposition we now face will surely fail.”

As we move forward this year, the marches will sustain and strengthen the work of those who commit themselves to the ongoing struggle for social justice.  As an activist whose entire life was transformed by “the struggle,” I know the power of seeing millions of people marching for what they believe in.  Let us continue to beat the drums for justice.  Let’s keep marching for our lives and the lives of our children!  The children are watching!