Exhibit A – Court-Appointed-Investigators-Report-on-City-of Oakland’s Response to Allegations of Officer Sexual Misconduct.  This scathing report exposes the total lack of accountability we have in Alameda County for police misconduct. It is particularly disturbing because OPD is under a consent decree that requires the Criminal Investigation Division (CID) Commander to inform the DA of possible criminal conduct by officers. Yet, neither the City Attorney nor the District Attorney have taken any responsibility to enforce this provision of the Consent Decree. This persistent problem has cost our City millions of dollars.

Our DA says she had no knowledge of the investigation of police sexual exploitation going on right under her nose. The Court’s report verifies this claim. Nancy O’Malley had no idea that sex trafficking by the police was happening in Alameda County. It has been reported that two investigators in her office were part of the problem. She says she was completely unaware of the ongoing investigation until she read about it in the newspaper. To me, that is a gross dereliction of duty on her part.

When Officer Brendan O’Brien killed himself in September 2015 and left a note, he was still under suspicion of killing his wife. The question is why the DA did not ask “what’s in the suicide note?” 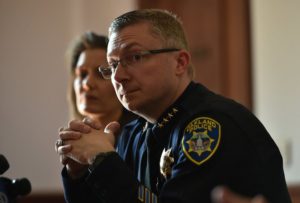 The Court report leaves no doubt that various members of OPD, certainly including former Chief Sean Whent, the Internal Affairs Division and CID Commanders engaged in obstruction of justice. When asked if she intended to investigate anyone for obstruction of justice, DA O’Malley said flatly “no.” Surely, this is why OPD felt completely comfortable covering up these crimes. There simply is no history of accountability for police officers in Alameda County.

“Is this because I was little?”

The Court finds that OPD did not properly investigate because of “an implicit but evident bias against the victim.” The report says “put simply, CID and IAD wrote off this victim.” Regrettably, I observed a similar bias in the DA’s response. While our County’s female leaders did not come right out and blame the victim, no one acted like they gave a damn about Jasmine. It was as if her exploitation was not taken seriously. Ultimately, the DA left Jasmine to languish in a Florida jail for 17 days. 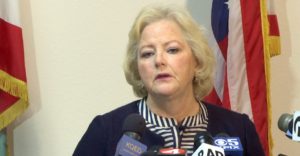 When DA O’Malley famously announced “I would charge these officers but I don’t have a witness,” Jasmine was facing a felony and 15 years in prison. She was tricked into going to Florida in the first place by the Richmond Police Department.

The fact is the Richmond police sent DA O’Malley’s star witness across the country. Richmond PD placed Jasmine in a situation where she was held against her will, assaulted and arrested because she wanted to come home.  If I were the DA, I would absolutely demand a thorough investigation of possible witness tampering. I would absolutely do everything in my power to hold whomever sent my witness to Florida accountable. More importantly, I would do everything in my power to bring her home. The same bias that OPD exhibited was obvious in the DA’s response to Jasmine’s incarceration in Florida – they wrote her off.

In 2012, California voters passed realignment legislation to reduce the numbers of people in prisons and bring them home. The measure, Proposition 36, passed in Alameda County with 78.6% of the vote.  Yet, in 2016, DA O’Malley proposed to spend only $1.72 million of her $73 million budget on re-entry services.

In 2015, the DA’s office prosecuted almost 41,000 adults and 1001 juveniles.  Ninety-three percent (93%) of the adult cases reviewed for charging resulted in some type of prosecution. So, if you get arrested in Alameda County, there is a 93% chance that you will be prosecuted for something. In contrast, Homeless Court meets six times a year and helps about 300 people a year.

The vast majority of the prosecutions (59% – almost 29,000 cases) were for misdemeanor crimes. The misdemeanor numbers include thousands of women arrested for prostitution. In 2015, the Safety Net Program – a program to create a safety plan for at-risk and high-risk victims of commercial sexual exploitation – only reviewed 83 cases.

In 2015, almost 1500 juvenile cases were presented to the DA. Of those 1,001 (67%) resulted in prosecutions. Felony arrests of African-American kids were a startling rate of 25 per 1,000 compared to 2.3 per 1,000 for White kids. Only 112 kids were referred to a restorative justice program. Only 80 kids participated in our Collaborative Mental Health Court. In 2014, Alameda was one of only 9 counties in the State where the DA only charged Black or Latino kids as adults. “The New Jim Crow” is alive and well in Alameda County.

Why We Have to Make A Change

We have got to change the picture of justice in Alameda County. The days when the DA can “talk the talk” and not “walk the walk” have to be over. As Adam Foss says, we need prosecutors who want to change lives, not ruin them. We need better public safety outcomes. Alameda County has the 4th highest homicide rate for young people (ages 10-24) in the State. Whatever she’s doing is not working.

Donald Trump and Jeff Sessions are about sending folks back to jail.  Since 2012, we have rejected that approach in Alameda County. We want to bring people home and rebuild families and restore our community. We want to end the horrendous racial divide that has infected our judicial system. We want to treat and teach our kids how to be kids. That’s how we need to spend our money – by investing in our people. We need Justice Done Right in Alameda County.