I’m flying home from a conference and a brief visit with Mom. My mind is focused on renewing the Call to Action for a fair investigation of Bay Area police sex trafficking. My heart is focused on the City that I love. The City by the Bay that is the real heart of the Bay – Oakland. 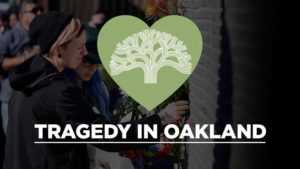 We receive the first reports of a major fire late Friday night. Over the weekend, the horror grows. More than a 100 people trapped in a huge fire. It’s unbelievable. Our whole city is traumatized.

People begin to mark themselves “safe” on Facebook. Even though I am a thousand miles away, I feel compelled to mark myself “safe” as well. We are all beating as one heart. Across our city, we share the victims’ heartache. Our shock is amplified by the reports of young lives with so much promise for the future now gone.

We have all experienced tragedy at some point in our lives. Life is about challenges and overcoming challenges. Sometimes the challenge comes in the form of tragic death. Oakland is no stranger to tragic death. As we reel from the tragedy of the worst fire in our history, let us acknowledge that most of our community lives in a constant state of trauma. In 2016, we were all victims of 75 reported murders across our City.

Most of the 75 people murdered in Oakland in 2016 died by gun violence. Gun battles in the midst of a crowd of people happen way too often. Some people were stabbed and beaten like Karla Ramirez-Segoviano. Some, like Reggina Jefferies, were innocent bystanders killed in unexpected places or circumstances. Jefferies was at a vigil gathering for two teenager friends who drowned. She went to the vigil after doing a praise and worship dance in her church.

Reggina’s murder in the middle of the day in downtown Oakland was as shocking as the murder of Antonio Ramos in September 2015.  He was shot while painting on a community mural under the highway.

“Grief-stricken” families in Oakland are commonplace.  Street memorials of candles, flowers and pictures have become “normal.”  I know I am not the only one that becomes completely distraught when I accidentally walk upon a street memorial. I know that the young people in our City are not the only ones traumatized when they bury someone who died way too young. As we live and work in the midst of out-of-control violence, we are all living in trauma.

City Council President Lynette McElhaney recently called for the creation of an Office of Violence Prevention.  She cited the tragedy of young people, both victims and witnesses, who experience an unacceptable level of violence in our City. She is no stranger to the tragedy of gun violence in Oakland.  She lost her grandson to what she describes as “a preventable disease in our community.”

As we mourn the 36 young people who died in a tragic fire, let us also mourn the 75 people whose murder this year is equally as tragic for us, their families and those who loved them. Those who died in Oakland in tragedy this year need all of us to carry on – to live on – to love more and do more to repair our City. Let us remember that none of us is promised tomorrow. Yes, there is tragedy in death. But there is still joy in life.

Each of us – the living – have the opportunity – indeed the responsibility – to shine TODAY.  To love TODAY. To speak up TODAY. Remember that “life is not a dress rehearsal.” We must tell young people that if you are in school, don’t drop out and think you are coming back later. If you are in a gang, get out now. If you are in politics, don’t “wait your turn.” If you have a vision for your future, begin it now.

And don’t get stuck in grief. Time alone does not heal all wounds. Don’t try to bury your feelings or “be strong.” Get the help you need to heal. Look for therapists who are offering healing services throughout our City. Many therapists are volunteering grief recovery services in the wake of the fire. If you are able to help in our recovery from the Fire, reach out to the Gray Area Foundation for the Arts.

In Oakland, as we close out 2016, I hope this holiday season will be a season of healing and love for all of us. As we enter 2017, let’s make it the year that we cure the disease of preventable violence and death in Oakland.